How To Take Screenshot On Android Phone and Devices [All Versions]

How To Take Screenshot On Android Phone and Devices [All Versions]

Posted by Suresh Kumar
» android, » technology
» October 1, 2015
Taking screenshot becomes very important for people, whether they are blogger or normal user of Android devices. In early days taking a screenshot on Android phone or tablet was a pain, but nowadays it becomes very simple.
In this post am writing about how a normal user of android devices can take screenshot easily on their android phones or other devices with android operating system.
Before proceeding for taking screenshots I would like to tell little about smartphones with android operating system.

Android: Android is an operating system for tablets and mobile phones in the same that PC's run Windows as their operating system. it is maintained by google and available in different versions. As android phones are highly customizable and as can be suit your needs and tastes with wallpapers themes, applications and many more! And just because of these features android becomes more popular among people by competing windows and iOS.

In these days every user of android mobile phones want to take screenshot from their android devices, because it becomes fashion and habit among people to capture the live screen on phones what the phone is playing, whether it is screen or images from gallery. Screenshot captures the full screen of android phone and automatically save that image in gallery. Specially this habit of screenshot is very popular among users of social networking sites like Facebook, twitter and others. User of these sites take screenshot and upload it on their social profiles to share with friends and families. But unfortunately some people don't know how to take screenshots. By seeing this importance I decided to post about this. I also did a research on this topic before writing and I found lot of ways already available on internet to guide people how to take a screenshot in android phones, but all are very complex and some of them are saying to connect phone with SDK manager before taking screenshot, and some are saying to do differently. It makes user confused about what to do or what don't? But in actual its so simple and easy to take screenshot without any manager or connecting phone to anywhere.

How to take screenshot on Android?
No matter which Android version is being used by you, just follow the two ways given below to take screenshot on any any android device whether that is phone or tablet.
1st Method:
You can do it simply just by holding Volume down and Lock button ate the same time for 2-3 seconds and you will have done. It will show you a message in your notification area that 'Screenshot is saving' and later you will find that image in your gallery. Try it if you are using newer version of android i.e android 4.0 or above. Just see in below image- 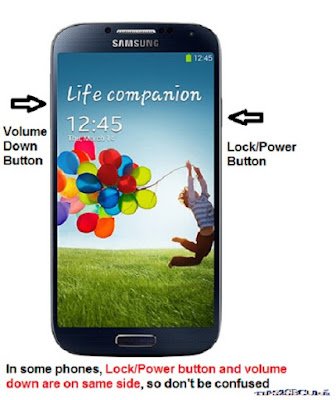 2nd Method:
If you are using older versions then you can use this method.
You can do it simply just by holding Power/Lock and Menu button ate the same time for 2-3 seconds and you have done. Here is second method a little difference of keys in this method user has to press Lock button and menu button instead of Volume down and Lock button.
So Interesting and simple na :) 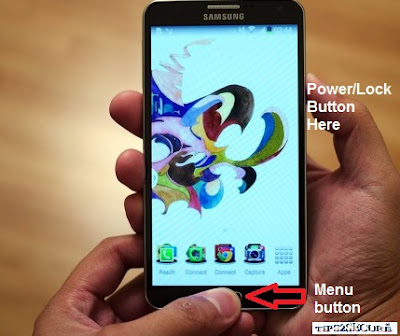 Message: I hope that you have enjoyed 'How To Take Screenshot On Android Phone and Devices [All Versions]' article. However, if you want me to deliver more articles then please share my post. You can use Social Sharing Widget provided at the end of every post. After all, Sharing is Caring!.
T2S