Posted by Suresh Kumar
» recharge, » telecom
» November 14, 2015
Bharti Airtel has introduced a new plan called Airtel Night data cashback under which the operator is offering 50 percent data as cashback to users surfing between 12 am to 6 am. Also, the operator has made subscription free.

The plan is available for 2G, 3G and 4G subscribers.

How to Activate 50 percent Data cashback offer on your number? [Only for Indian Users]

It can be done in three ways. 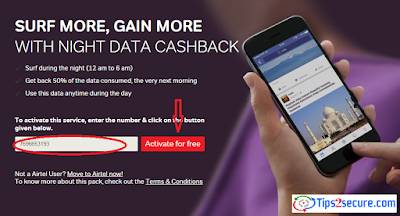 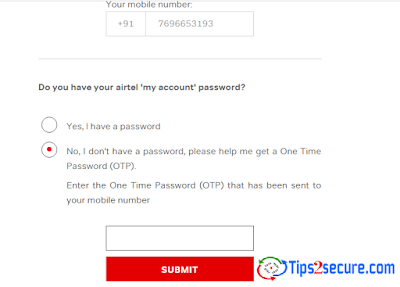 5. It will send you a password of four digits on your mobile number.
6. Now click om Submit button.
7. Done,

Second Way (Through SMS):
Airtel subscribers need to activate the plan by sending SMS <NIGHT> to <121>

Third Way (Through Missed call)
First, Airtel subscribers need to activate the plan by giving a missed call to <55555>

50 percent of the data consumed between 12am to 6am is credited in the morning and can be used anytime during the day. Note this cashback service is available for prepaid users currently. Airtel says the service will be available for postpaid customers within a week.

Conclusion
Airtel is one the leading mobile networks in India which gives high-speed internet connectivity than Aircel, BSNL etc. But its tariffs are costly than Aircel or BSNL and also its validity also might less than other leading networks. So Airtel is trying to reduce the rates during night hours where net users might less and results in high internet speed connectivity. If you are not a user of Airtel then you can port your number into Airtel using Mobile Number Portability (MNP) Services.

Message: I hope that you have enjoyed 'Airtel Free 50% Night Data Cashback - Activate Now!' article. However, if you want me to deliver more items, then please share my post. You can use Social Sharing Widget provided at the end of every post. After all, Sharing is Caring!
T2S

how to deactivate it?

It will be deactivated automatically after 28 days.
You will have to activate again if you want to continue this service after 28 days.

But Airtel charging me rs. 5/- everyday even though the its free night cash back.

Sometimes, there may delay in the messages or your pack may be expired. It is valid only for 28 days. After this you have to renew again to continue. This service is totally free.

This is a free service by Airtel. Airtel may charging you for some other services. Better to contact customer care and ask them about it.

This 50% return is on Internet DATA, that we use to surf the Internet, not on the calls.

Is this pack is eligible for daily 1 gb data offer?