RSA was first described in 1977 by Ron Rivest, Adi Shamir and Leonard Adleman of the Massachusetts Institute of Technology. It is an algorithm used by modern computers to encrypt and decrypt messages. It is an asymmetric cryptographic algorithm. Asymmetric means that there are two different keys. This is also called public key cryptography, because one of them can be given to everyone. The other key must be kept private.

Cryptography relies on numerous mathematical techniques from Number Theory – which until the 1950s was thought to be a largely theoretical pursuit with few practical applications.  Today RSA code is absolutely essential to keeping digital communications safe.

RSA encrypts messages through the following algorithm, which is divided into 3 steps: 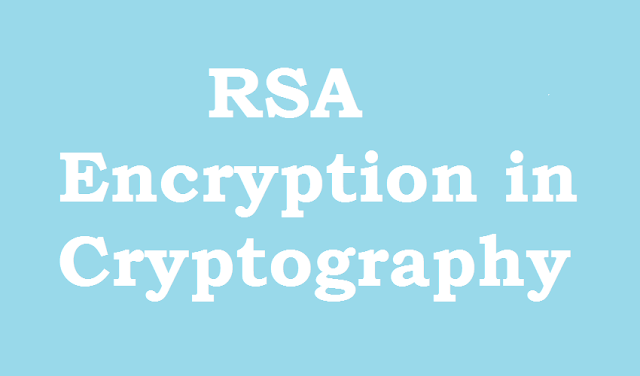 2. Find n such that n = pq.
n will be used as the modulus for both the public and private keys.

2. When Person B wishes to send the message "M" to Person A, he first converts M to an integer such that 0 < m < n by using agreed upon reversible protocol known as a padding scheme.
3. Person B computes, with Person A's public key information, the ciphertext c corresponding to

4. Person B now sends message "M" in ciphertext, or c, to Person A.

1. Person A recovers m from c by using his/her private key exponent, d, by the computation

2. Given m, Person A can recover the original message "M" by reversing the padding scheme.

This procedure works since

By the symmetry property of mods we have that

From Euler's Theorem and the Chinese Remainder Theorem, we can show that this is true for all m and the original message

Alice generates her RSA keys by selecting two primes: p=11 and q=13. The modulus n=p×q=143. The totient of n ϕ(n)=(p−1)x(q−1)=120. She chooses 7 for her RSA public key e and calculates her RSA private key using the Extended Euclidean Algorithm which gives her 103.

Bob wants to send Alice an encrypted message M so he obtains her RSA public key (n, e) which in this example is (143, 7). His plaintext message is just the number 9 and is encrypted into ciphertext C as follows:

When Alice receives Bob’s message she decrypts it by using her RSA private key (d, n) as follows:

To use RSA keys to digitally sign a message, Alice would create a hash or message digest of her message to Bob, encrypt the hash value with her RSA private key and add it to the message. Bob can then verify that the message has been sent by Alice and has not been altered by decrypting the hash value with her public key. If this value matches the hash of the original message, then only Alice could have sent it (authentication and non-repudiation) and the message is exactly as she wrote it (integrity). Alice could, of course, encrypt her message with Bob’s RSA public key (confidentiality) before sending it to Bob. A digital certificate contains information that identifies the certificate's owner and also contains the owner's public key. Certificates are signed by the certificate authority that issues them, and can simplify the process of obtaining public keys and verifying the owner.

How secure is RSA?

The security of RSA public key encryption algorithm is mainly based on the integer factorization problem, which can be described as:

Given integer n as the product of 2 distinct prime numbers p and q, find p and q.


If n is small, the integer factorization problem is easy to solve by testing all possible prime numbers in the range of (1, n).

As our computers are getting more powerful, factoring n of 1024 bits will soon become reality. This is why experts are recommending us:

Message: I hope that you have enjoyed 'RSA (Rivest-Shamir-Adleman) Encryption' article. However, if you want me to deliver more articles then please share my post. You can use Social Sharing Widget provided at the end of every post. After all, Sharing is Caring!
T2S