Hideman VPN Review: Should You Use This VPN Or Not?

Hideman VPN Review: Should You Use This VPN Or Not?

Posted by Suresh Kumar
» tech reviews, » technology, » VPN
» November 5, 2016
There is some kind of restrictions in each and every country. Some of the websites are blocked. As a person, one needs to use those websites. At that time, there is no direct way to use such sites which are blocked in the country.

But Yes, there is one indirect way by which one can gain access to blocked websites. VPN can be used to unblock partially unblock anything. So here comes the question what is VPN? Why should one use VPN?

Virtual Private Network is a network technology which is used to create secure network connection over a public network. This public network can be any network like the internet or the network of your service provider. There is wide usage of VPN. Many Corporations, educational institutions and some of the government agencies are using VPN.

Why should you Use VPN?

We are using the internet each day. We do the online transaction, online work, chatting and many other things with the help of internet. When we go online, there are high chances that your activities are being vulnerable for you. Someone may take your information and use it.

So the VPN provides you the security and encryption by which you can protect all your online activities like sending emails, online shopping or chatting, etc. With the help of VPN, you can keep your web browsing anonymous.

I am also one of those people who want to secure all transaction which I do every day. I was searching for the good VPN since few days to meet my requirements. After searching and trying some VPNs, I have come to the best VPN which is able to fulfill all my needs. So I have decided to write a complete review of that VPN here.

Yes, I am going to write a review of Hideman VPN which I have tried, and I am completely satisfied with its performance.

Hideman is the VPN created by Hideman Ltd. Which is the London based company and it was established in 2011. Hideman VPN is having its servers located in more than 22 countries, and this list is still growing...!!!

The best thing about Hideman VPN is the way it provides security, and you can do anything anonymously. All you need to establish the connection with one of the remote server. Once you are done with this part, all the traffic from your device will pass through the secure tunnel and the outside world can only see that traffic as it were located on the same network with the remote server.

1. Encryption: There are different VPNs which are using only 128 bits encryption algorithms, but Hideman VPN uses 256 bits encryption. It supports Open VPN, L2TP and PPTP protocols.

2. Logging Policy: VPN is wastage of your money if they save all your login data. But Hideman VPN does not keep any of your browsing data with it. They keep your data for 14 days in the free version, but once the 14 days are gone, they delete that information.

3. Servers location: Hideman VPN has its servers in 22 countries. So you can use any of the servers anytime. With this feature, you will get more speed and fewer loads while browsing.

4. Support of Torrent: Yes, you heard it right. When you choose some countries like Singapore, Hong Kong, Romania, etc. , you can use torrent.
5. Speed: Speed is the most important thing while browsing the internet. You can experience the very high speed with Hideman VPN as they have servers in 22 countries. You can use the full bandwidth in paid version.

6. Support: Support is the thing which differentiates Hideman VPN from other VPN providers. Their customer support is great. They provide support via Chat, Skyp, and Email. 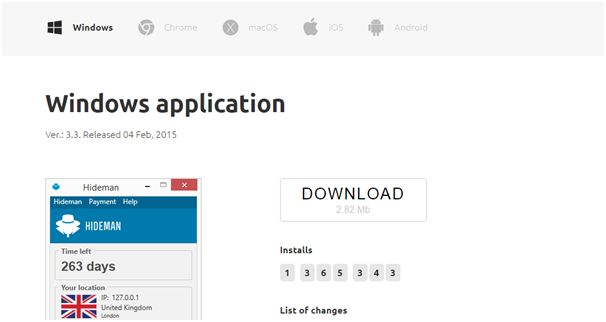 Downloading Hideman VPN is the very easy process. You just need to click on below-given link and choose the appropriate version for your device.

In Paid Plans, there are two categories of plans which are offered by Hideman.

Message: I hope that you have enjoyed 'Hideman VPN Review: Should You Use This VPN Or Not?' article on Tips2secure. However, if you want me to deliver more items, then please share my post. You can use Social Sharing Widget provided at the end of every post. After all, Sharing is Caring!
T2S